Today we are going to be finding out about the Napier Earthquake disaster and then we will be writing, and filming, a newspaper report about it.

There is a lot of information to read through so take your time, there’s no need to rush! If you would like to wait until an adult has time and can read through it with you, then please do. 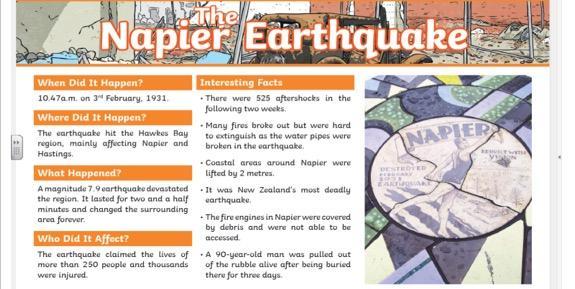 On 3 February 1931, New Zealand’s deadliest earthquake devastated the cities of Napier and Hastings, Hawke’s Bay. At least 256 people died in the magnitude 7.8 earthquake: 161 in Napier, 93 in Hastings, and two in Wairoa. Many thousands more required medical treatment.

At 10.47am on 3 February 1931, a violent shock, followed closely by a second, rocked Hawke’s Bay for almost three minutes. A tanker at sea felt a violent vibration, and the seamen on board looked to the shore to see Napier covered by a cloud of rising dust. 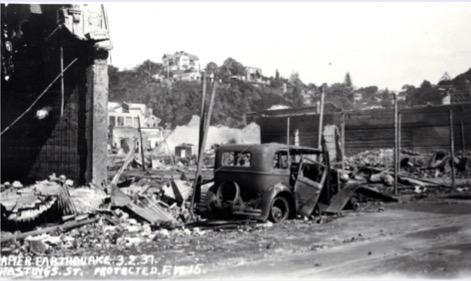 TheHMS Veronicahad just tied up in Napier’s inner harbour when the earthquake hit. Captain Morgan at first thought there had been an explosion on board, but then saw the wharf twisting, and beyond it houses and other buildings crumpling to the ground. Dust rose in clouds from the shattered buildings, making it difficult for people to breathe, and huge splits in the roads appeared.

Panic-stricken, people ran down to the beaches where they hoped to be safe. As the water in the bay receded with the rising of the land, many thought that a tsunami was on the way, but this was not the case.

The first victims of the earthquake were people who ran out to the street and were struck by falling masonry, as the stone decorations on many of the buildings crashed to the ground. Many were killed instantly when buildings collapsed on them, but others were buried in the rubble. Most of the deaths were in the city centres.

Attempts to rescue the trapped and injured began almost at once. The local people were helped by sailors from the HMS Veronica. Some would-be rescuers were killed when buildings collapsed further, or more earthquake tremors struck.

At the central fire station in Napier the engines were covered in debris from the destroyed brigade building, and were unable to be used when fires broke out in the city centre soon after the earthquake. In Napier the gas supply had been shut off three minutes after the first tremor, and the risk of fire from electrical faults was avoided by fuses on the street power poles which blew out. Fires were started in three chemist shops where a gas jet was kept burning to melt the wax used to seal prescriptions. The shops also had a lot of flammable materials, such as different types of oil.

Water for fighting fires ran out as pipes cracked and broke underground, and fighting the fires became impossible. Rescuers fought to bring out the trapped and injured victims from the rubble before the fires reached them, but many people died. Because human lives were the first priority, many valuable records and goods were lost in the blaze. The weather had been fine, after many hot dry days. A wind blew up not long after the earthquake, and spread the fires further. The fires burned in Napier for 36 hours before finally dying out. 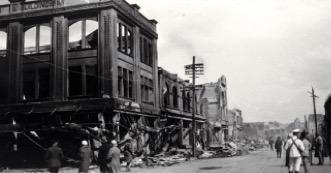 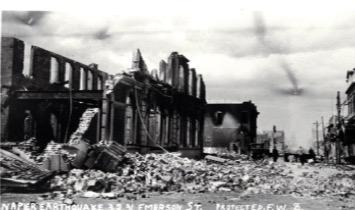 In Hastings, 20 kilometres away, brick buildings and chimneys also collapsed. The water supplies in both cities were no longer working. The tram tracks in Napier were twisted out of place. As power was lost, trams came to a halt all over Napier. When the city was rebuilt, the tram lines were not restored.

One 90-year-old man was buried in the earthquake rubble, but was finally dug out alive, three days later. In Hastings almost 200 buildings were destroyed. The most deaths were in a department store, but there were also many who died in the public library. Hastings also suffered from fires and the firefighters had problems with their water supply, but the spread of the fire was not as great as in Napier. 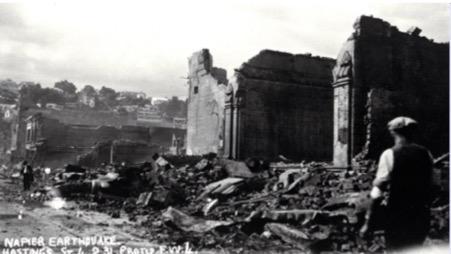 The earthquake had a magnitude of 7.8 on the Richter scale. There was no seismograph in Hawke’s Bay, but the waves of the earthquake were measured at Wellington and other places around New Zealand. The main fault was buried under the earth’s surface, and did not break it. Instead it heaved up the land and set off two smaller faults which broke on the surface.

The sea floor just off Hawke’s Bay was lifted more than 2.7 metres, and the Ahuriri Lagoon and tidal flats were drained. The present Napier airport stands on land which was once part of the lagoon.

The impact of the earthquake was greater than the Murchison earthquake a year earlier, because it struck in an area where there was a higher population. The structures in the area were not earthquake-resistant, which meant that the high number of deaths was the result of collapsing buildings and falling debris. The Hawke’s Bay earthquake was the worst natural disaster recorded in New Zealand.

Time to get ready Year 3!

And now let’s see the news in action…

You are going to be working to write a news report ready for filming.

Remember to use the 5 W’s (Who, What, Where, Why, When) and be Clear, Conscise and Correct! 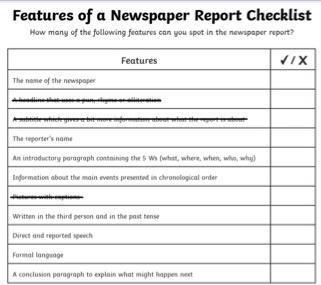 Spelling - Play the game 'snowball smash' (it is the only free game) to practise applying your spelling knowledge to le words.

Make sure you don't get hit too many times with a snowball otherwise your player cries!  I wasn't very good at this... that is how I know!  Oops - more practise needed Mrs Spooner!!

Activity: Today you could create a poster to show the rules for -le words OR you could practise your words using some of the ways below.  Choose the activity that you think will help you the most with your spelling this week!