Have a think to yourself...

Look carefully at the photographs on following slides and spot the rocks.

There are three types of naturally occurring rocks.

Click on the rocks below to watch a short video clip explaining how each of these types of rocks are formed. 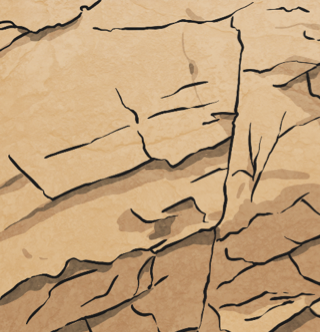 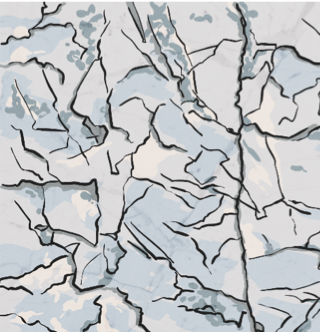 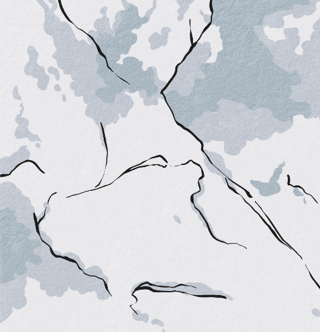 Far under the ground, the temperature is hot enough to melt the rock into a liquid.

This is called molten rock. Igneous rocks are formed from this molten rock in two ways. 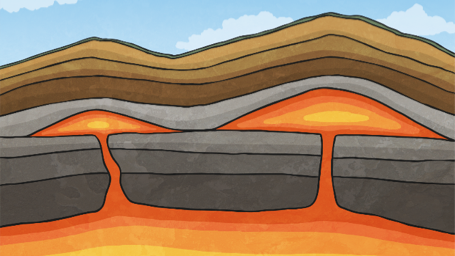 Molten rock that remains underground is called magma. When magma cools and hardens it becomes a type of intrusive igneous rock. 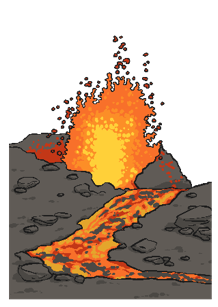 Molten rock that comes out of the ground is called lava. When lava cools and hardens it becomes a type of extrusive igneous rock.

Sedimentary rock forms under the sea.

The following illustrates the process: 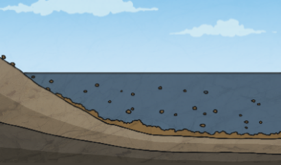 1) As a result of weathering and erosion, bits of rock end up in lakes and rivers. Rivers transport bits of rock and deposit them on the bottom of the sea.

This process is called sedimentation. 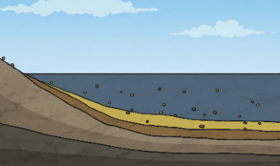 2) With time, more layers (strata) pile up and press down on the lower layers of rock. This process is called compaction. 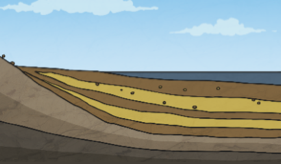 3) Over time, water is pushed out from these layers and the process of cementation occurs. This is when salt compounds glue or cement the bits of rock together so they form a solid layer.

Metamorphic rock starts off as either a sedimentary or an igneous rock.

This happens when rocks are near magma and therefore heat up, which changes the chemicals in the rock. Remember: The rocks never melts! It just heats up and changes, then cools down again.

This illustration shows how the igneous rock near magma is being heated and changed. 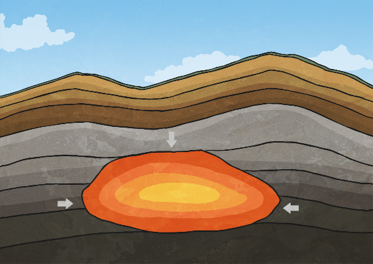 This illustration shows how the sedimentary rock near magma is being heated and changed. 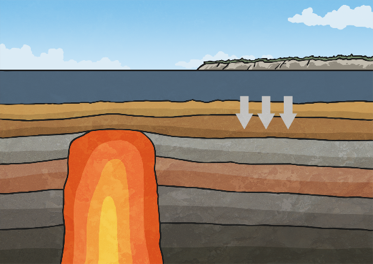 The scientific name for man-made rocks is anthropicrocks. Anthropic rocks are made, modified or moved by humans.

The Romans first invented concrete,although the type of concrete we use today dates from 1756.Concrete is a mixture of water, aggregate (either sand, rock or gravel) and cement

(a mixture of chalk and clay).

Victorians created rock gardens and surfaces that looked like rock from mock rock. Types of mock rock include pulhamite,which looked like gritty sandstone.

James Pulham, who invented it, took the exact recipe for it to the grave! Coadestone (made from grog, flint, quartz, soda lime glass and clay) is another type of mock rock.

Bricks have been around for a long time. The first bricks come from a place called Tell Aswad in modern day Syria. That was in 7500 BC! However, bricks were used to build in most of the ancient civilisations and are still used today. Bricks are usually made of clay soil, sand and lime or concrete materials. They can be air dried or fire-hardened.

In your book, write down the three types of natural rocks and 2 bullet points to describe each of them. For example:

I'd like you to go in to your garden or outside space (keeping safe of course!) and find some interesting looking rocks. Bring your favourite 2 inside and draw them into your book. Try to decide which group of rocks it is from and use some of the fantastic scientific vocabulary that I'll give you when writing about your rock underneath.

Some rocks, like granite, are incredibly hard and can only be cut or split with specialist tools. On the other   hand, clay is soft and can be easily moulded.

Rocks that are durable are more resistant to weathering (being eroded – that is broken down – by rain and wind). More durable rocks, such as marble, have been chosen to create buildings and for outside use for this reason.

Density measures how ‘bulky’ the rock is (how tightly packed the molecules are), not how heavy. Density can be checked by testing the buoyancy (whether they float in water) of rocks. High density rocks sink whereas low density rocks float.